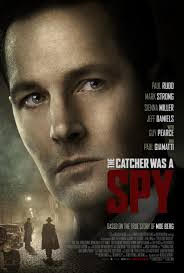 Summary: An American catcher and coach in Major League Baseball who later served as a spy for the Office of Strategic Services during World War II.